“In the beginning, sometimes I left messages in the street.”

There’s an old saw, deployed in freshman (or maybe more properly sophomore) English classes about first lines. They set the tone, or gesture to the plot. They are a sign pointing off to the castle. “It is a truth universally acknowledged, that a single man in possession of a good fortune must be in want of a wife.” One rich man (and, in truth, several) will marry in the course of the novel. So here in Wittgenstein’s Mistress

we have a woman, in an world empty of people (and, eventually, we learn of all living creatures) writing her life as a signal to whomever might be there, which is, also eventually, no one. These street-messages were written before, when she was still searching, and when she was, coincidentally, mad with her aloneness. So many years have passed that the woman who looks back out from the mirror – a mirror she once signed, in lipstick, with a name that keeps changing, because she would only and ever be the person looking back from the glass – the woman who looks back from her from the mirror is her mother.

She burns a house to the ground, and lives in its double. She worries, rightly, that the burned down thing that once was a house is still called a house by her. There is no one else to call it a house, or a ruin, or anything at all.

Speaking aloud is a form of madness.

It’s dangerously easy to fall into the single-sentence paragraph style of this book, which, to be frank, irritated the fuck out of me at first. I sat on my porch, in the midst of my life, half-managing the political machinations of several neighborhood kids and my own as they shot each other with Nerf guns and played princess, often at the same time. (Medicis would understand, but with poison.)

Don’t make every thought a paragraph.

But then I went to the cabin.

Where certainly not every thought is a paragraph, in truth, something more like all thoughts do not collect into paragraph drifts of connectives. There was a grouse in the grass, and she and the grass were almost the same thing, but she was eating out the grass and craning her neck to watch me even though I only moved to smoke the cigarette I was stealing. My daughter ran up and caught me smoking and the grouse vanished like a magic trick, not even exploding off into flight, but shifting to become more like grass in the moment it took me to address me daughter and turn back. Who was I stealing the smoke from?

I think this novel would be a brilliant Twitter feed, or a tumblr with the Impact font of the lolcat: 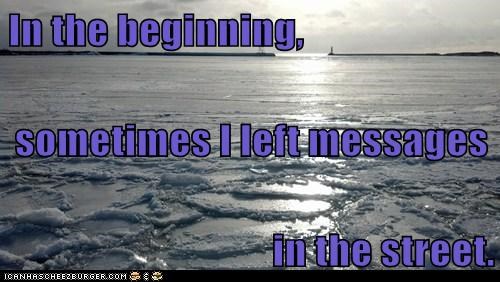 I think this novel predicts the solitary madness of social media.

I don’t expect linearity or conclusion from the single-line status updates of my avatared friends, even this word adrift to mean a collection of real friends, acquaintances, colleagues, and people I don’t even like. If they were all gone, I might gossip about people who were all gone, all gone so long their fame left a collection of single-sentence anecdotes about them. I would continue my updating of my status into the great ugly void of an empty world, which would only be ugly because it was a void of people to speak my madness too, not because it wasn’t beautiful. There would still be grouse-like grass I could steal a smoke from, though never an interrupting daughter, which is where the sadness comes in.

Last lines are their own riddle, in all truth.

“Someone is living on this beach.”