Recently, I said some stuff about the epistolary novel being dead on arrival, which has more or less been proved true with this book. In a ba-dump-tss kind of way. I hedged that the epistolary novel has been hanging on in Gothic-slash-horror longer than in straight up fiction, so I get to revel in my rightness, as usual. The confirmation bias rules.

Dead Inside: Do Not Enter: Notes from the Zombie Apocalypse

was crowdsourced by the folks at Lost Zombies. It seems to be a more specific kickstarter for a zombie movie, pulling together shaky hand-held found-footage stuff from the zombie apocalypse (which, you may know, is occurring now) and running it into a sort of narrative. There’s a timeline and a frame narrative here: a backpack stuffed with all of these notes from the zombie apocalypse taken off of a 10 year old girl who had been bitten and put down. I pretty much hate the editorial timeline, which runs the usual American panic about quarantine camps in a way that is both unlikely and annoying to me.

I just spent more time than was wise checking the history of quarantine/isolation and in modern times, there is very little history of anything but the isolation of specific individuals while contagious, let alone huge whack camps of sick people set up, filled, and turned into zombies in days. Seriously, bureaucracy is an issue, and always has been. (I highly recommend checking out the case study of the historical Typhoid Mary. Why, yes, I have just linked to Wikipedia. You can shut up, Internet.) Especially when the illness is widespread and easily contagious. But whatever, Americans, have your panic about the gumment. It’s not that I think you’re wrong, exactly, except for how you’re wrong exactly. You know?

But the notes from the apocalypse here are wonderful. Or, um, not wonderful, but a good mixture of heart-breaking and funny and mean. Not long ago I read Art Spiegelman’s In the Shadow of No Towers, which is his reaction to 9/11 in the days and weeks following the event. The thing that was so surprising to me, ten years since the Towers fell, were the stories about people being thoughtless, callous dicks. Seriously, Art, why are you freaking out so much? I mean, two planes have just vaporized two of the largest buildings in the world in an ugly symbol of cultural warfare, but you need to get ahold of yourself, man. We run our narratives from when the whole cataclysm crashed over us.

I mean, how often do I relate that, when my sister called me when the first plane hit, from an office in Midtown, totally losing her shit, I was stupidly blase? It has to be an accident or something, like that time in the 40s when that little bi-plane hit the Empire State. There were hundreds of people on that plane! She yelled. The horror cracked a little, but I still didn’t get it until I got sucked into the CNNmageddon, the second plane, the falling, the ten years down the road where we’ve elided our shitty, less than empathetic responses. I don’t know what note I would have written at the time, but it might not have been awesome.

Mum,
Morwenna called about some plane crash not far from where she works. She’s okay but freaked out. You should probably call her when you get a sec. And you’re out of dog food, btw.
♥,
Ceridwen

So the occasional mean-spirited “I never loved you and I’m glad you are now one of them” notes felt true, if ugly, an artifact of our sometimes crappy instincts in trauma. I mean, trauma isn’t exactly ennobling.

they weren’t bitten, I just told you that so it would be easier for you to leave them.

There are sad notes and funny notes and notes about typography. 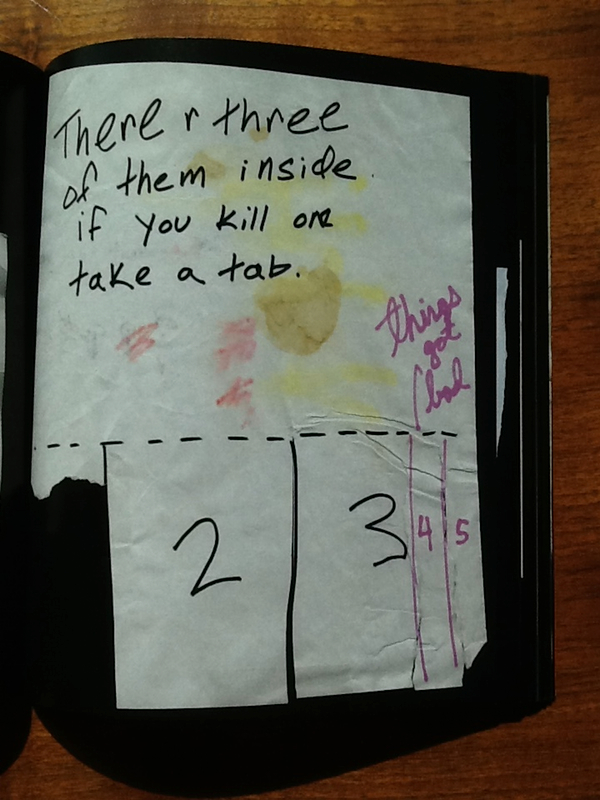 This is solidly a half-hour book, something you should put down fast with a bullet in its brain before it turns. These sort of found-objects collage things rely on you, the reader, to fill in gaps and create narrative, the way the social animal in us does, and I can entirely see being in the wrong mood for this, thinking too hard about specific instances, and generally having this frame narrative not hold together. But I really enjoyed the whole existential Marco Polo that went on, people scrawling notes to one another as the end of the world went down. My favorite in the collection is this: 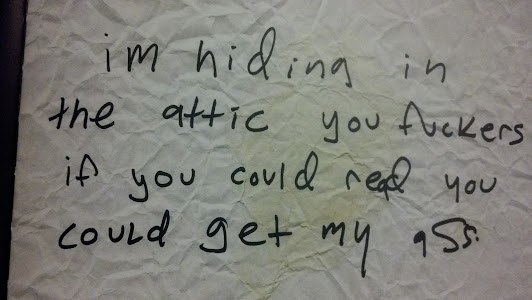 The worst thing about zombies is that they are illiterate, my friends. Boo yah.