My daughter and I ditched over to the Walgreens on Lake St in Minneapolis to get a gift for a birthday party she was to attend. I’ve always liked that drug store, despite it being down heel and over-stuffed. Even though my neighborhood is very mixed – residential and commercial, foreign and domestic born, poor and maybe not rich, but certainly middle class, different races – the clientele for businesses tend to sort by class or ethnicity. White girl that I am, I don’t frequent the botanica two blocks down; that store is not for me. I also don’t go into the punker store (too old), nor the saddle shop (too not a cowboy), nor the various halal groceries (too…atheist?) Even within our mixed neighborhood, we sort.

But the Walgreens on Lake cuts this really cool cross-section. Some of this is, admittedly, the fact that it’s a drug store, and the need for microwave popcorn and some $2 novelty socks at 11pm cuts across all socioeconomic and racial divides. But still, even then, when you compare that Walgreens with the CVS just blocks up, which has roughly the same kind of 2-for-1, as-seen-on-TV kind of endcaps, the Lake St Walgreens has a decidedly more broad clientele. And really garrulous employees. I was in there getting a prescription filled for my husband a couple of weeks ago, and the pharmacist browbeat me into getting a flu shot, at which point a young woman in a hijab stuck me efficiently, and then gave me a sticker.

So I was just jaw-dropped when I saw the following spinning display rack right smack in the middle of the make-up section. 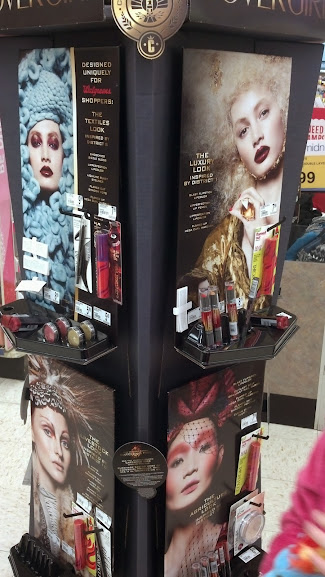 The idea of Hunger Games district-themed make-up was bad enough, but to be confronted with it in one of the few places I can think of in my city that don’t exemplify the (admittedly simplistic) divisions of Collins’s dystopia, well, that was another thing entirely. But I’m probably getting ahead of myself here, because when I posted this image on facebook, those who hadn’t read the books didn’t get how egregious this ad campaign is.

So, a little back story on the country of Panem, where Collins’s story unfolds. Panem is a post-America America, occupying the same landmass, but there are hints this a post-peak-oil and/or other post-apocalyptic environment, but centuries past whatever crisis changed the US into Panem. The political/economic system has been reordered into twelve districts controlled by an unnumbered district known as The Capitol. Each district is defined by a primary industry: coal-mining, agriculture, small electronics, heavy industry, etc. Due to a rebellion by the districts 75 years earlier, each of these districts offer up two teenagers to the Capitol as tribute every year to fight to the death in the Hunger Games. Out of 24 tributes, only one will survive. The whole event is televised.

Now, I’m the first to admit this political/economic system is ridiculous, and it wouldn’t take more than a minute to rip it apart as unrealistic in concrete terms. But when you’re dealing with dystopia, and to a lesser extent young adult literature, strict realism isn’t the point, nor should it be. I was bowled over by Collins’s country of Panem because she captured a certain emotional reality that we live every day. My neighborhood is a Capitol sorted by districts. It is a microcosm of Panem, a country which makes manifest our American economic disconnects into the rigid structures of barbed wire and geography. Collins turns the economic, political, racial divides into someplace clarified and concrete, and then she has our children fight to death within it. Sure, it’s unrealistic, but it’s also happening every godamn day of the week.

But what does this have to do with make-up? Lemmee tell you. The plot of Hunger Games deals with Katniss Everdeen, a teenager from District  12, the poorest and least populated district in Panem, and her experience as one of the tributes in the Hunger Games. The main industry of District 12 is coal mining. Mum and I took a tour of the coal mines in the coal districts of Wales, and what I took from the experience was that mining is the most out-of-sight-out-of-mind of the heavy industries. Men disappear underground to bring up fuel for the capitalist fire, and when they die in cave-ins and of suffocation or eaten by machinery, their bodies are often not recovered. Like fishing towns, the graves are predominantly for women, because the men just disappear into a pit. The labor movements roil underground in thousands of unmarked tombs. (At this point I highly recommend doing a google for “pit ponies poetry” and just freaking out at the poems you’ll find. They were brought down to work until they died. I won’t put a fine point on the definition of “they.”)

One of the things I love so fiercely about Hunger Games is how it has this nuanced engagement with things generally seen as girly frivolity, things like fashion. Katniss is brought from her district to the Capitol, and denuded and perfected according to the beauty standards of the capital city. The sequence of her bodily perfection reads like an assault, almost a sexual one, her body flensed and bitten, her poverty stripped and removed. The Capitol takes away the marks of poverty in order to kill her with spectacle. She wakes up to the the gentle tutelage of Cinna, who will be her fashion consultant through the Hunger Games. He knows what she’s gone through, and he has a game plan. While Katniss, rube teen, wants to reject all the trappings of her assault and the cruel spectacle of the Hunger Games, he sees the subversive utility of playing the game to other ends. He reads it all against the grain.

As a completely unacculturated teen, Katniss can only see her engagement with the Capitol in all-or-nothing ways. She will wear black and combat boots and scowl. She will act the part of her resistance because she cannot look the part of her resistance. But the character of Cinna shows the beauty of subversion, the ways you can twist things designed to oppress you to uplift you. It’s not as simple as “looking pretty makes you stupid”, but something weirder like “looking like you have authority means you have authority” or maybe “take seriously the deliberately unserious” or maybe “not everything is as it seems.” To misquote Elizabeth Bishop: sometimes we are living in imaginary gardens with real toads in them. Panem is an imaginary garden with real toads.

After the first movie came out, I was confronted by a Katniss Barbie doll in the toy aisle, and I really had to consider whether I thought this was a nightmare or not. After a ton of searching my late-model feminist soul, I eventually decided Katniss Barbie was okay. It’s kind of perfect, in a way, because the Hunger Games series can be consumed as just addictive pop fiction, this present tense hurtle to finish all about love triangles and teen tragedy and the like.  It’s a Barbie, totally all about consumption, which you watch, glued to set just as surely as any Capitol citizen.

I’ve seen a lot of teen reviews of the series that seem to have zero idea that there’s a deeper message to the Hunger Games series, training their attention on love triangles and pretty dresses. But one day those kids might wake up, bolted out of sleep that, wait, omigod, I’m living in the godamn Capitol. That’s the power of the series. That’s the power of the Katniss Barbie: something you play with until you realize that play is action. It’s practice, and it’s a subversion.

But, boy howdy, is the Covergirl Hunger Games campaign completely message-deaf. Dressing up as a coal miner, with “flamed out” eyeliner and mascara, with nails black and blue like bruises or coal is the kind of horrible poverty porn that every single person in Panem who doesn’t live in the Capitol hates about the Capitol, and with good reason. Don’t play dress up with the inescapable economic hardships of other people, people who on some level live and die so you can swan around in the comfort you so richly deserve. Accessorize with black lung, and malnutrition, and infant mortality, and short lives that don’t matter to anyone but those who lived them. Accessorize with injustice.

This isn’t even getting into the model marked “livestock” from District 10, with a feather headdress and a fur collar, animistic eye make-up fanning out over her stark blue eyes. It’s almost too easy to rip this easy equation of female bodies with cattle for the slaughter, the invocation of bestiality, the dehumanizing furriness. Or the dreary Orientalism of the model for District 3, all made up like some cyberpunk fantasy, denuded of hair, even her eyebrows replaced with sharp triangles. When I think cheap electronics, I think Asian woman, amiright?

Or the District 1 “luxury” model whose look invokes Marie Antoinette. Which, okay, maybe that’s hilarious. Maybe that’s the only look here that isn’t repulsive, that gets on some level the symbolic structure of the districts to the Capitol. I don’t even know what to say about the model for District 4: Fishing, which dresses up a black woman as a fish.  Or the District 2: Masonry look which puts Kabuki slash Mod make-up on a white woman. I just…my feminist background has no ways of dealing with this mess.

I’m kind of getting rage fatigue thinking about these looks, and the fact that probably dozens of people, maybe hundreds, were involved in their creation; that thousands, probably tens or hundreds of thousands of dollars went into this campaign, and not one person said, “You guys, we should be ashamed of ourselves.” These aren’t, presumably, teens who have an excuse when they miss the point completely, but grown ass adults. I’m not even trashing the models or peons – we all have to work, and eat – I’m trashing all the damn people with the power to greenlight such a complete disaster. Who have no sense of irony. Who can’t even read.

I’m not even saying I’m not a Capitol dweller myself. I am. I’m not even saying that shame is enough of a political act to counter the wrong in the world. It isn’t. The wrongs in the world are staggeringly large and crushingly intractable. But compounding them by playing poverty dress-up is disgusting, and worse than that, it’s the wrong kind of subversion.

Under the spreading chestnut tree, I sold you and you sold me.

But I’m not buying it this time.