Well, it’s nice to see that Walking Dead, after the tense and almost claustrophobically personal episode last week, managed to get back to treading water until they waste a bunch of poorly drawn characters in a big barn burnin’ like the end of last season. Certainly, Arrow on the Doorpost

was better structured than we’ve seen in the the latter half of the third season, where it seems like characters just bump around and have conversations until some walkers attack and then the whole business ends…for now.

Despite a lot of growling and posturing, not much was accomplished by the meeting of the Governor and Rick. I actually started laughing when they framed Rick like a gunfighter on Main Street – subtly done, guys. Bravo. I haven’t brought up the comics in a while, because so much has diverged that it can be a bad comparison, but at this point we were getting a sense of an almost relaxed sense of home at the prison. They had planted crops, which were beginning to come to fruition, and were setting into a round robin of love triangles and stuff. They’d stopped clearing the yard because they were more inward focused, living their lives. They had driven in stakes, which was why there were stakes at all in their stand with the Governor. But this lot? I’m not seeing much invested there, short of constant gestures towards Judith.

While I still like Morrissey’s purring sociopath take on the Governor, I’m beginning to wonder if he isn’t, um, wrong for the part? The man’s got so much gravitas and there’s something mountainously immobile about him, which sits in strange contrast with the jumpy long-haired meth-freak of the comic. The townspeople of the comic were obviously afeared of the Governor, held in check by fears of expulsion or worse. The comic Governor was a warlord and a despot, and I get why people were afraid of him. Morrissey’s Woodbury though? Not so much. Dude’s obviously batshit, but no more batshit than Rick, and possibly less so. Comic Gov’s people never would have been honking at the barricades to let them out; they were in the care of a madman and they knew it. It’s possible the writers could do something interesting with Morrissey’s soft sold approach…lol, no, it really isn’t. 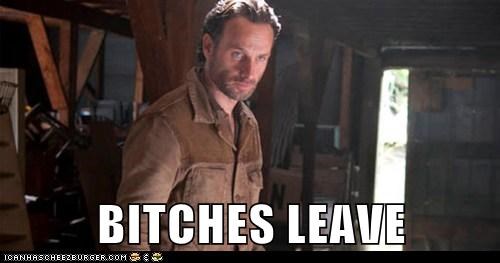 I liked the sequence of their lieutenants chest-beating and then falling into soldiery camaraderie, as well as Gandalf talking stumps with Milton. But godamn it, Andrea! Here’s the problem: she’s totally right, as is Merle when he’s all like, I’ve got a gun in my room, let’s go cap him right now, but the writers are so damn invested in this big mano-a-mano dick-measuring situation between Rick and the Governor to the detriment of character. They have undercut the secondary characters, so hard, so far, that when Rick tells Andrea to get out because the men are having important men-talk, I just laughed instead of getting pissed off like I should. Such unbelievable gender bullshit. 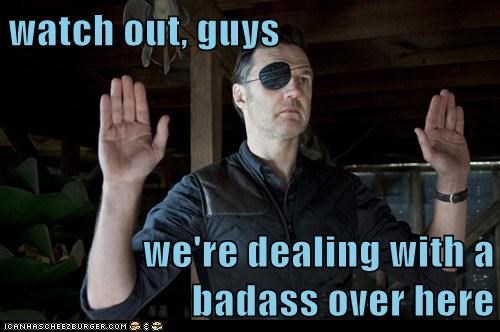 Anyway, I don’t feel like I have a ton to say, partially because next to nothing happens in this episode. Oh, but I did make this lolGovernor that I’m pleased with. You’re welcome.

4 thoughts on “Review: Walking Dead: Arrow on the Doorpost”